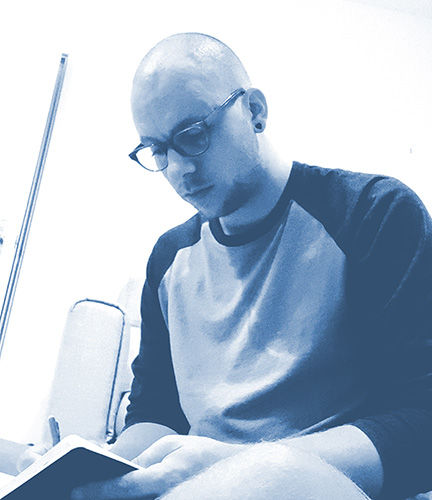 Hamblin’s work has an ‘almost functional’ quality about it. You could use it, if you could figure out how. Motifs and symbols are evoked, yet emptied out at once. The logic is backwards; part magic, part science, mostly art. The display seems clean, straightforward, but it encourages noise over clarity. Sense jostles with nonsense.

Repetition and seriality define the practice, with multiples seeming to enhance a message, imbuing it with a ritualistic quality, suggesting force, whilst simultaneously eroding its legitimacy, exposing a veiled, failed attempt at transcendence – an obsession.

What’s left after these subtractions are pieces in a state of flux, transitioning towards something greater than their constituent parts, but falling short; a ‘lesser event,’ an act towards becoming.

Close inspection however reveals a meditative sensitivity towards the materials at hand, highlighting a natural elegance, almost as if this were transcendent in itself.

In all, Hamblin’s oeuvre establishes a particular persona, an investigative spirit flitting between disciplines in a search for the sublime; curious yet distracted, hungry; on an eager but infinite road towards the unattainable.

Hamblin cites a range of influences, from artists such as John Latham, Keith Tyson and Theaster Gates, to House music, Sun Ra, multiverse theory and science fiction. He was born in London, UK in 1988, has exhibited internationally and currently lives and works in the UK.

'Ishihara 14' - Group exhibition at The Queen of Hoxton, London, England

Foundation in Art and Design at Dunstable College

Certificate of Achievement in Art from Manshead School
Next
Previous